Q.  Describe the classification of Computer?

Write a short note on the following. 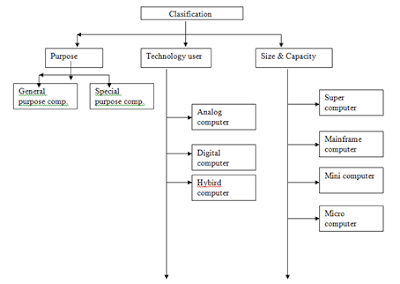 Digital Computers:-  Digital computers are mainly general purpose computers that represent and store data in discrete quantities or numbers.  In these computers, all processing is done in terms of numeric representation (Binary digits) of data and information.  Although the user enter data in decimal or character form, it is converted into binary digits (O’s and I’s).  Almost all the computers used now a days are digital computers.

Difference between Analog and Digital Computers:-

Hybrid Computers:-  Hybrid computers combine the technology of both analog and digital computers.  These computers store and process analog signals which have been converted into discrete numbers using analog-to-digital converters.  They can also convert the digital numbers into analog signals or physical properties using digital to analog converters.  Hybrid computers are faster than analog computers but much slower than digital computers.  It find applications is special areas.
For example:-  In a hospital, analog devices measure the heart functions, temperature and other vital signs of the patients.  These measurements are converted into numbers and supplied to a digital computer.  This is used to monitor the patient’s vital signs and it gives an immediately signal if any abnormal reading is detected.

According to size and capacity:-  According to size and memory/storage capacity, computers are of following four types:-
Super Computers:-  Super computers is the biggest and fastest computer, which is mainly designed for complex scientific applications.  It has many CPUs (central processing units- main part of computer) which operate in parallel to make it as a fastest computer.  These computers are very expensive and more powerful than mainframe computers.  It is typically used fall the following applications:-
·        Weather forecasting
·        Petroleum Exploration and production
·        Energy Mgt
·        Defense
·        Nuclear Energy Research
·        Weapons research and development
·        Earthquake prediction (seismology)

PARAM and ANURAG are Super Computers produced by India.  CRAY 3, CRAY-XMP 14, NEC 500, are the another example of super computers.

Mainframe Computer:-  Mainframe computers are very large and fast computers but smaller and slower the super computers.  These are used in a centralized location where many terminals (Input/Output devices) are connected with one CPU and thus, allow different users to share the single CPU.  They have a very high memory (several hundred megabytes) and can support thousands of users.  These computers are faster and more powerful than minicomputers.  They are mainly used for following applications:-
·        Railway and Airline Reservations
·        Banking Applications
·        Commercial Applications of large industries/companies
Some examples of Mainframe Computers are- MEDHA Series, DEC, IBM 3090, IBM 4381, IBM 4300 and IBM ES-9000.

Micro Computers:-  It is a low cost small digital computer.  This type of compute contains a microprocessor as its CPU, a memory Unit, Input and Output device.  These are also called personal computer system.  Maximum speed of micro computers are up to 1 million bytes per second.  These types of computers can be used to play games, teach children math, make a painting, create net musical sounds etc.
They are very inexpensive families or home business can offered to buy a small system to use at home.
Micro-Computers can be classified into the following tow categories:-
·        Desktop Micro Computes
·        Portable Micro Computers

Desktop Micro Computers:-  Common type of Micro Computes, which can easily be accommodated on the top of a desk is called desktop computers.  The usage of such computers is quite common is offices, markets, homes etc.
Portable Micro Computers:-  These Computes are small is size and looks like a briefcase o a notebook.  They are very light in weight and easy to carry from one place to another.  They use batteries or electronic current.
Examples of these computers are:-
·        Laptop Computers
·        Notebook Computers

Laptop Computers sometimes called briefcase computes, can be used on your lap and are very portable.  Like a desktop computers, laptop computers have a full typewriter keyboard.  Laptop computers can be connected to larger peripherals.  For example- A regular size printer or a large monitor etc.
Notebook Computes are smaller is size than laptop computers.  These computers are idle for user who have to wok away from their offices.  The users of these computers might be a student, a journalist and a salesman etc. Example- IBM ThinkPad.

Ans :-
Operating System:-  Operating system is a program that acts as an interface between the user and compute hardware and controls the execution of all kinds of programs.  It is the most important program in the computer System.  It is one program that execute all the time always as the computer is operational and it exit only when the computer is shut down.  OS are the programs that makes the computer work hence the name OS.  It takes instructions in the form of commands from user and translates into machine understandable instructions.  It gets the instructions executed by the CPU and translate the result back into user understandable form.

The position of operating system in overall computer is following:- 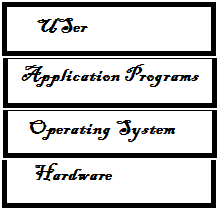 The operating systems are classified as-

Disadvantages:-
·        Non-Interactive Environment:-  Batch operating system allows on interaction between users and executing programs.
·        High Turn around Time:-  The turn around time taken between Job submission and completion is very high.
·        Off-Line debugging:-  This means that a programmer can not correct bugs the moment it occurs.

Time-Sharing Operating System:-  Time Sharing is a special case of multiprogramming operating system with a quick response time.  It allows many users to simultaneously share the computer resources.  It provides each user with a small portion of a time-shared computer.  In a time shared system since each action or command take a very small fraction of time, only a little CPU time is needed for each user.
As the CPU switches rapidly from one user to another user, each user is given impression that he has his own computer, whereas actually one computer is being shared among many users.

It has to handle a process within the specified time limit otherwise the system fails, resulting in a disaster many a times.  Such applications include- Scientific experiments, flight control, few military applications, industrial control etc.

Scheduling:- operating system is responsible for the scheduling of the input output devices.

Q. Give a complete overview of computer languages.

Language:- it is a mechanism that is used to exchange the ideas and thoughts between two or more entities. Like we human being use so many sort of languages such as Hindi, English, French, Japanese, Chinese etc. similarly to communicate with the machine we require language. From the very beginning of the origin of the computer the languages are developing side by side. There are so many types of computer programming languages. We can classify them in to the following categories.

A.I. :- presently our researchers are working with the generation of AI Programming Languages. These languages are used to develop the intelligent machines which may behave in some way of human being like vision, listening, speaking, thinking, walking etc. LISP, PROLOG are AI programming languages which are used for Robotics and Expert System Development.