Q. What is .NET Framework?
OR 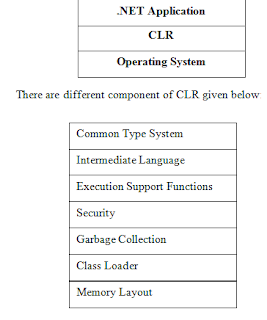 The CLR provide the number of services for application runs under .NET Framework, describe below:-

These are the some list of common services and functions perform by CLR.

It is the feature of CLR which enable the different language can run under the control of .NET Framework. The CTS supports a variety of types and operations found in most programming languages and that’s why we don’t need of type conversion of Data Types from one .NET Language to another .NET Language, for e.g. we can use the code of  VB into C# without any type conversion.

The CLS defines a set of rules that enables interoperability on the .NET Platform. These rules define a guide to third-party compiler designers and library builders. CLS is a subset of CTS and therefore the languages supporting the CLS can use each other’s class libraries. APIs (Application Program Interfaces) that are designed under the CLS rules can be used by all .NET Languages.

MSIL is also known as IL (Intermediate Language), is an instruction set into which all the .NET programs are compiled. The all languages which support the .NET Framework generate the MSIL code after compilation, which goes to CLR and generate the Native Code. It is like the assembly language which contains instructions for loading, storing, initializing and calling methods. 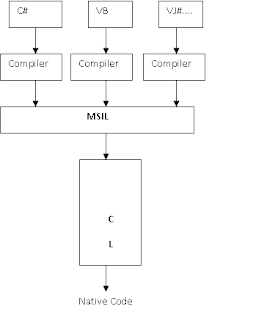 To build the application fast and without errors .NET Framework provide a library of base classes. We can use them by simply instantiating them and invoking their methods or by inheriting them through derived classes, thus extending their functionality. Most of the framework classes in the vast namespace called System.

Ans. C# is evolved from C and C++. So, some features of C# and C++ are matched. But C# has the number of additional features which make it very modern language as compare C++, some main difference between C# and C++ are given below:-

Q. Define the characteristics of C#.
OR
Q. What is C#?
OR
Q. Enumerate the benefits and limitations of .NET technology.

Ans. C# is a modern language which is derived from C and C++. C# is a fully object oriented language like java and it is the first component oriented language. It is the only language which is designed to support .NET Framework. It consist the is features of C, C++, Java and VB. It is most powerful, flexible and easy to read – write and maintain. The most common and important characteristics of C# are listed below. It is develop by Microsoft Corporation Team lead by Anders Hejlsberg :-

Object-Oriented
C# is truly object oriented language, because it support the Encapsulation, Inheritance and Polymorphism. There are no global variable, functions and constants, everything is an object. The class model of C# is built on top of the virtual Object system (VOS) of the .NET Framework.

Consistent
C# supports an unified type system which eliminates the problem of varying ranges of integer data type. All types are treated as objects and developers can extend the type system simply and very easily.

Inter-Operability
C# provides support for using COM objects, no matter what language was used to author them. C# also supports a special feature that enables a program to call out any native API.

Flexible
C# is a flexible language in nature, as we know that C# not support the pointer but by using unsafe we can the pointers for manipulation. But these codes are not type-safe, therefore it is known as unsafe.

The Managed Code of .NET Applications affects the system performance. The fact that managed applications are run by the .NET Framework is obviously going to affect performance because it will put extra overhead on CPU. The performance loss is going to vary considerably according to precisely what an application is doing, but in general at present you can typically expect a 5-10% increase in CPU time to perform a given task.

One more limitation with .Net Technology is that programmer must have to learn about .NET and concept of OOP before works with C#. If a programmer is excellent in VB6.0 but he/she doesn’t know about OOP then it is very typical that he/she build an application in .NET.